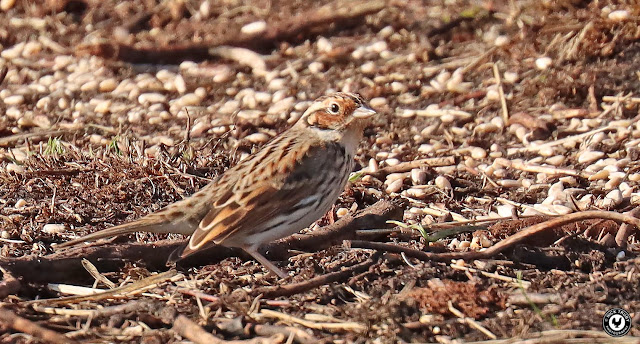 The 29th of March saw the first relaxation of Coronavirus restrictions with the lifting of travel bans throughout England. Along with many other birders this modification was great news since it meant that I could finally get out of Oxfordshire, go to other areas and hopefully see some of the rarer bird species that had been denied to us so far this year. The only snag was that I had a full schedule at work so wouldn't be going anywhere!

As luck would have it (or not, if you consider that work is also very important) the project that I was supposed to start on the Monday wasn't quite ready for me so, apart from a couple of catch-up smaller jobs, I had little to do for the week. A bird that I really wanted to see was the Rustic Bunting that had taken up residence for the winter at Thursley Common in Surrey. It had been present since the end of November last year and I had checked the bird news almost daily to see if it was staying faithful to the site. We had already missed out on a Rustic Bunting a few times before so I was keen to add one to my UK life list. A couple of them had evaded us while holidaying in Cornwall in the past. Last October when one had turned up and shown well at Lowestoft, we had set off early the next day but unfortunately the weather was so bad with torrential rain that it was too dangerous to travel and we turned back for home after just a few miles, after finding two drivers that had already come to grief by aquaplaning into ditches. As it happened the bird had flown off early morning and we would have missed it anyway so maybe fate saved a long and wasted journey.

My chance at the Thursley Common Rustic Bunting wouldn't come until the Tuesday. I kept an eye on the bird news all day Monday and sure enough the Rustic was present and showing well right up until the evening. A good friend of mine had travelled down during the day and seen it really well. So we made plans to leave early on Tuesday morning and get the bird for ourselves. We were on the road a little after five o'clock, it wasn't yet light and we should arrive at Thursley by seven. As we trundled down the M40 I noticed the full moon sinking below the horizon and a big part of my heart sank with it. The Rustic Bunting had been singing for the last few weeks and had acquired a near full summer plumage so it would definitely be moving northwards to its breeding grounds soon. Fingers crossed it hadn't chosen the night before to leave, after all we'd had good weather for a while and it hadn't so far.

The carpark at Thursley was already quite full when we arrived into a fresh and misty morning so it seemed as if we wouldn't be the only ones looking for the Buntings. I say Buntings because the Rustic had been kept company for a large part of its stay by a couple of male Little Buntings, another scarce species but one which we've seen before including one in Oxfordshire. The Buntings and other birds were attracted to an area on the common known as "The Bunting Bushes" where seed is scattered for the birds to eat throughout the winter. The practice of supplying supplementary winter feeding for birds is widespread and many rare and scarce species have been found coming to the provided food. Once a bird has found the feeding station then they tend to stay loyal to the handouts for a long period. I'm the same with my fridge.

I was hoping that the fog had persisted on the Common all night but it was obvious that it was just an early morning shroud created by the frosty start to the day and it would soon lift once the sun popped up. As we walked towards the Bunting Bushes the uneasy feeling that I'd had earlier when I'd seen the clear night and full moon amplified, I'd been duped by birds leaving overnight before in very similar conditions. I had done my homework, as I always do, and knew that the Rustic Bunting had always been reported as being "still present" by 09:00 at the latest and usually an hour earlier than that. We joined the assembled throng of twenty or so other, socially distanced, birders at just past 07:30. I glanced at my phone and saw that somebody had reported the two Little Buntings ten minutes previous but as yet there had been no sign of the Rustic variety.

We stared at the bushes and the ground below them, expectantly awaiting the scarcer birds but for half an hour had to be satisfied with a trio of Goldfinches and a single Lesser Redpoll. Buntings were flying into the trees just to our left but owing to the angle of the sun, they were difficult to identify but to my eye they did all look like Reed Buntings. At two minutes past eight, a Bunting sprang forward through the bushes. Some of the Toggers, clearly they had been here longer and had possibly visited before so knew what the bird was, instantly began firing off a volley of shots with their cameras. I had to check the identity first, it wasn't a Rustic Bunting but also not a Reed Bunting, it was one of the Little Buntings. I joined in the rapid fire of camera shutters. 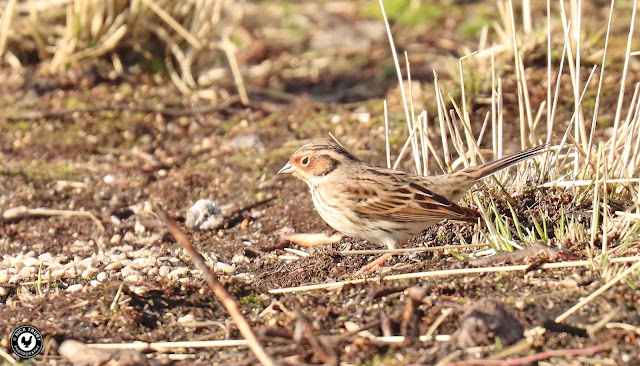 Nothing much else happened for the next forty-five minutes except for more repeated visits by the Goldfinches. It was almost nine o'clock and there had not even been a whiff of a Rustic Bunting. My uneasy feeling had been replaced by a major sense of foreboding. A drake Mallard waddled purposely into the arena and looked as if it was going to announce, "Sorry folks but there'll be no Rustic Bunting today" and then began taking its own fill of the food on offer rather than let it go to waste.

The camera shutters started clicking again. A Little Bunting had appeared and I was quicker to join in this time. This bird was initially a lot more cautious than the first bird we'd seen an hour before so could well have been the second bird but to my eye, all Little Buntings look the same. Little Buntings are smashing looking birds, superficially looking like a female Reed Bunting but they're a tad smaller (obviously) and have rich chestnut coloured cheeks and a well defined white eye-ring. I'd seen two Little Buntings before, both at some distance away, so this bird being so close was fantastic to see and I managed to add some improved images to add to my own personal and modest portfolio. 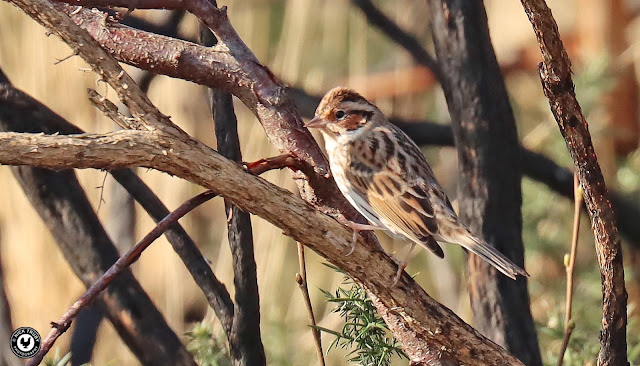 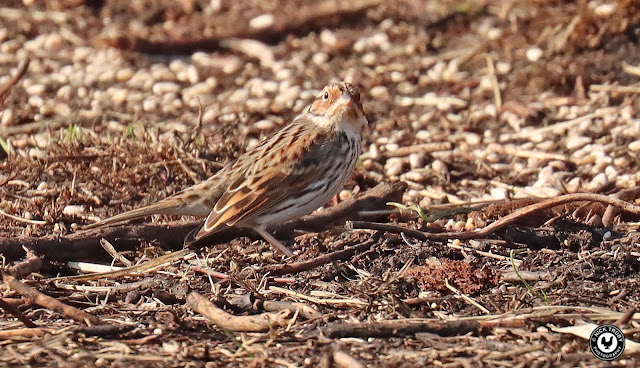 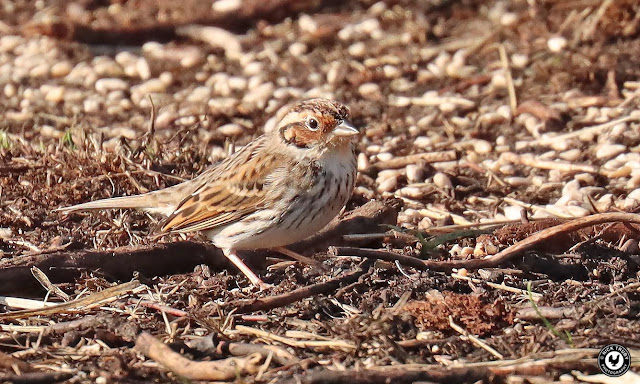 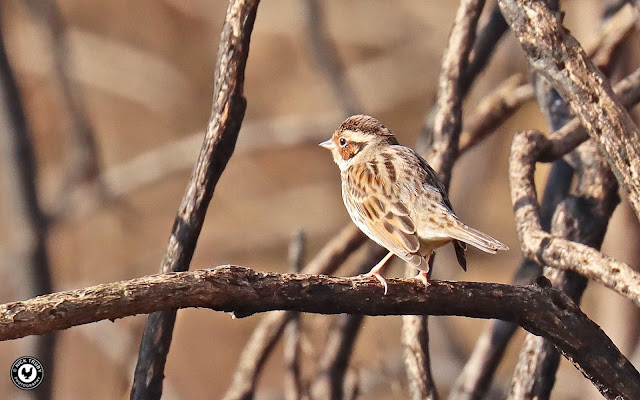 It was another forty-five minutes until a Little Bunting appeared again. However it was also nearly ten o'clock and the Rustic hadn't shown. It was evident that the scarcer bird had indeed moved on overnight which was a trifle hard to take considering that it had been present for almost four months but had decided to ship out on the first day that we had the opportunity to go for it. Perhaps we should have cheated the Lockdown rules like so many others had. Mind you I got stick recently from some of my peers for daring to bird on Otmoor which is just ten miles from my home during Lockdown so I'd probably have been completely ostracised from the local birding scene if I had. At least the Little Buntings had provided some decent consolation for missing out on the Rustic Bunting so the disappointment was tempered a bit. There will be another Rustic Bunting to twitch in better times somewhere next autumn. Indeed the same bird could well return to the Bunting Bushes for another winter. 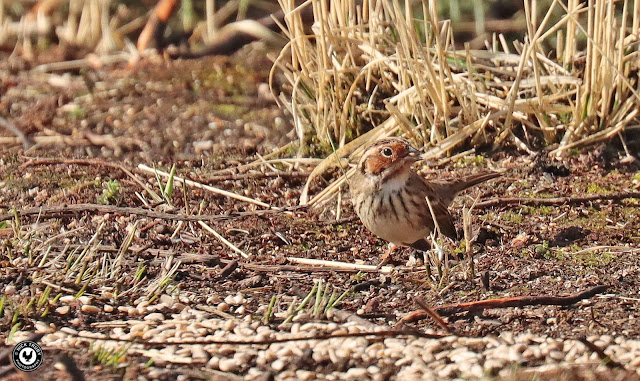 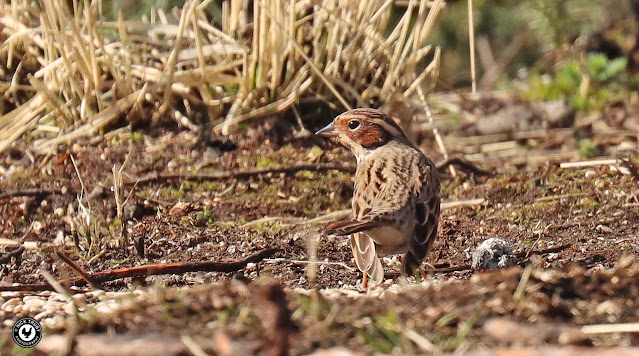 We stuck it out for another hour before giving up. Woodlarks had flown overhead and during a "call of nature" wander we had added Dartford Warbler, Siskin and Stonechat to the day list. We heard Crossbills too but I couldn't be bothered by then to raise more than a cursory interest in any of them. The only subsequent birds we saw at the Bunting Bushes were a few Reed Buntings, more Goldfinches and a greedy cock Pheasant.

The Rustic Bunting wasn't reported again, such negative news actually provides a small degree of comfort because it means that at least we didn't just "miss it" on site. Our interest in seeing new birds hadn't waned and we were already looking forward to the next day out. With twitching you have to accept the occasional dip, we've had a few now, but those misses just make the successful twitches even more pleasurable. There was a much rarer bird down in Devon and I had more time off at the end of the week. As for the Rustic Bunting all it needed to do was stay for one more day! And it couldn't even do that.