Lesser or greater? It just doesn't add up! 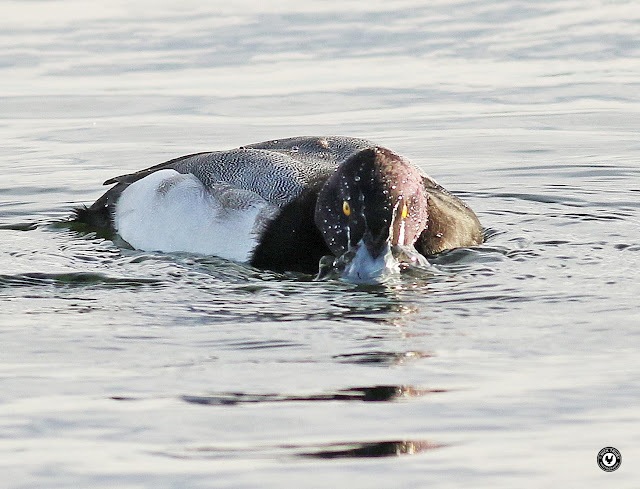 On Friday 17th November a greater scaup was discovered at Farmoor. Another greater scaup, in eclipse plumage, had been found there at the end of September but I had contrived to miss that bird by inches. So on Saturday morning Mrs Caley and I duly returned to the reservoir to pin down the duck. However despite an enjoyable walk around most of Farmoor, we failed to locate the scaup and left empty handed once again. Imagine my chagrin then when the duck was re-found later on Saturday afternoon! Interestingly though after local birders had viewed the photos posted online the consensus shifted to the opinion that this greater scaup was in fact a lesser scaup, a much rarer species from North America and a bird that I'd only encountered once before when I saw two males at Drift reservoir in Cornwall over ten years ago.

So on Sunday I waited until receiving the news that the duck had been seen that morning and then hot tailed it back up to Farmoor to see for myself. As is frequently the case the duck was showing well but right over the other side of the reservoir from the car park so we'd have to walk for a good mile to see it! Of course if I had been clued up I could have parked right next to the southern bank but hey, I wasn't! After a 20 minute slow trot, Mrs Caley and I joined the throng of half a dozen or so birders and settled in to enjoy the rare vagrant bird. The lesser scaup showed brilliantly well, often coming within 20 metres or so of the shore and allowing frame after frame filling shots. It appeared to have all the features of lesser scaup, lacking the crest of the tufted ducks that it associated with, having a grey vermiculated back and a small black nail to the bill. A small doubt that I had though was that it seemed larger than the tufted ducks and I had read that lesser scaup was supposed to be slightly smaller. Still the general opinion from the gathered watchers was that it was a lesser scaup and that views of the open wings underlined this, lesser scaups lacking the outer whitish primaries that greater scaup possess. I failed to capture the open wing pattern on the camera though so was unable to check this. 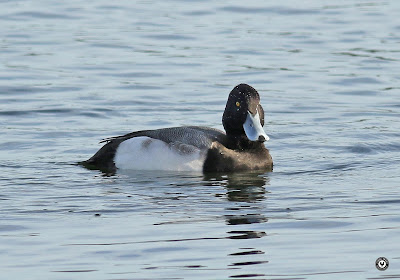 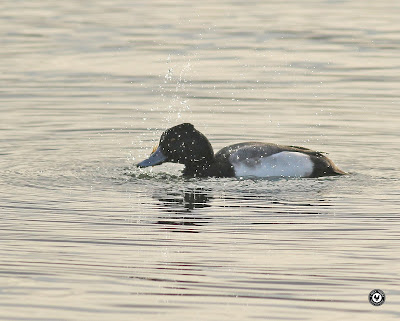 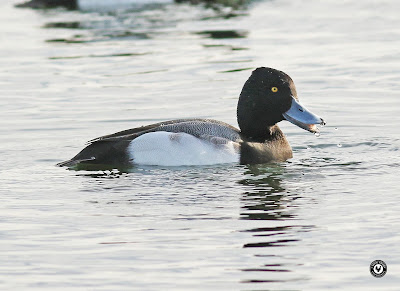 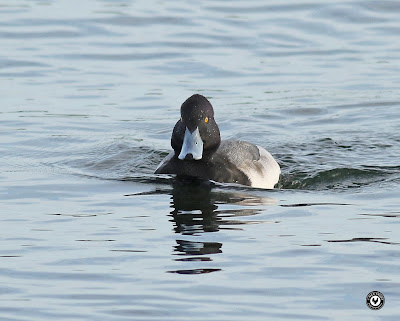 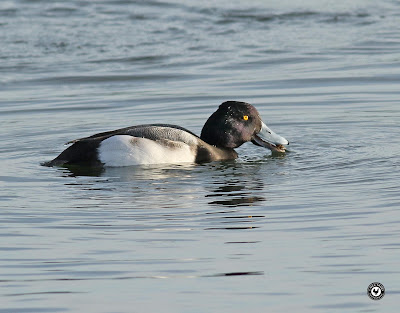 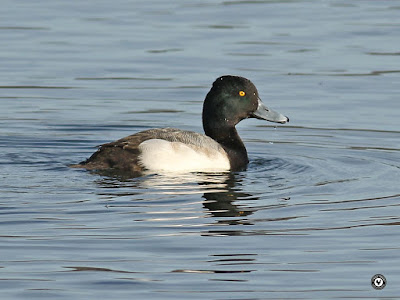 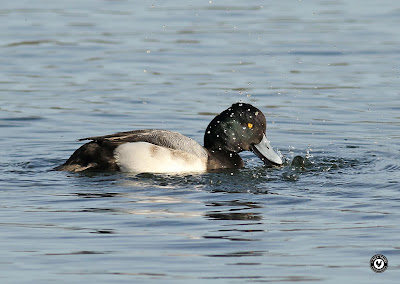 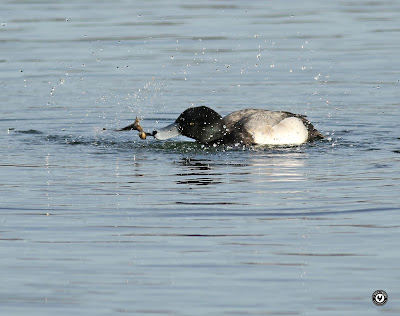 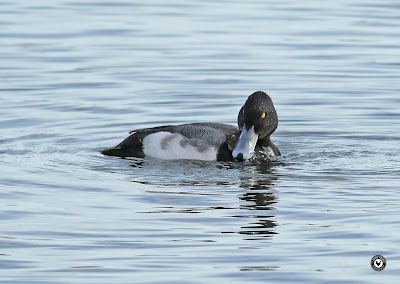 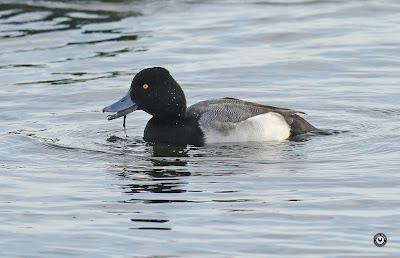 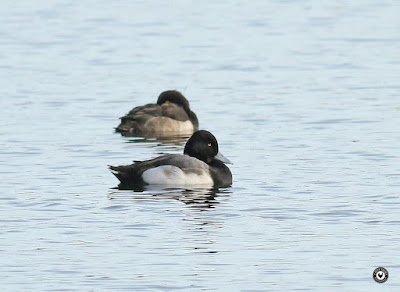 Some comparison shots with tufted ducks and coot. 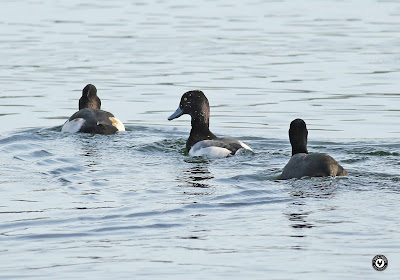 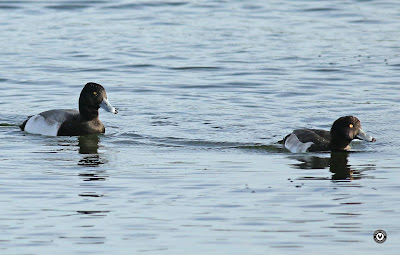 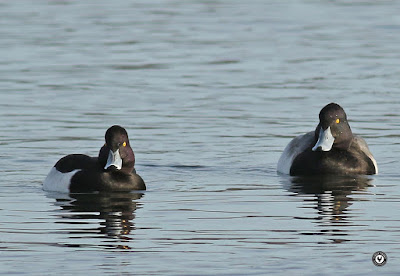 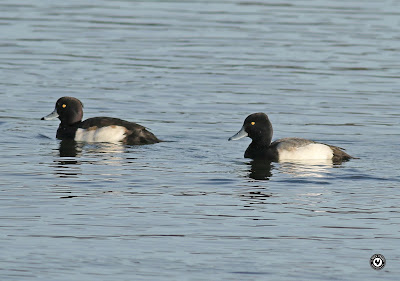 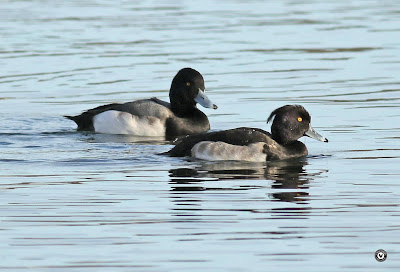 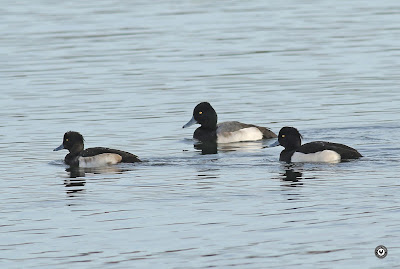 And a few diving and preening shots. 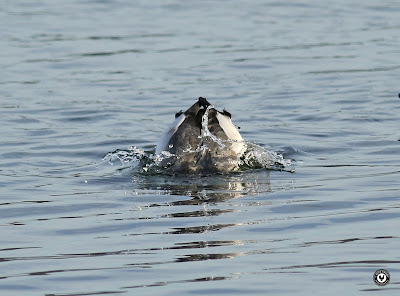 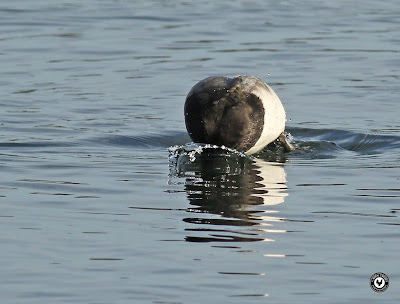 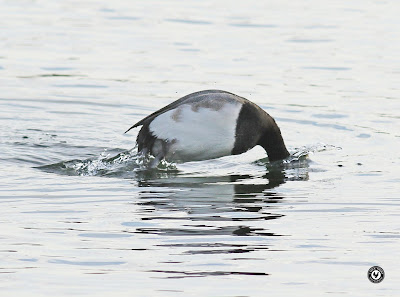 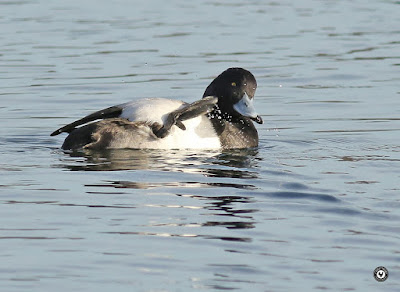 We went back home very happy that we had added lesser scaup to our (non-existent) Oxfordshire lists (really must write that up one day). Then midway through the afternoon a post on Oxonbirdingblog suggested that the bird might actually be a hybrid. Horror! And indeed, after being seen on Monday by far more qualified judges than I, the bird was demoted to hybrid status, possibly tufted duck x greater scaup or lesser scaup x greater scaup.

The analysis is excellently detailed on www. oxonbirding.blogspot.co.uk so please read there if interested in a more scientific description.

Still it was a fabulous duck and I managed to get some nice photos if nothing else!

Some of the other birds seen over the weekend while looking for and at the duck.

The calm after the storm. Cornwall 17th October 2017 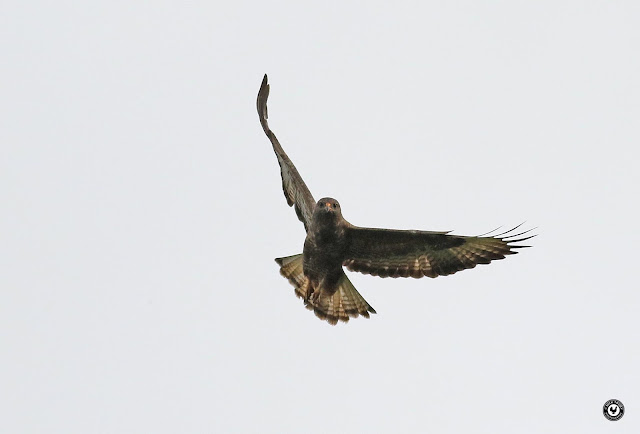 Mrs Caley and I come to West Cornwall for a week every October primarily to bird the sheltered valleys and when the opportunity arises, to twitch rarer birds. So far we'd had a quiet week bird wise but then the weather had been unkind. Not so much down to the ferocity of the wind particularly with ex-hurricane Ophelia passing through on Monday but more to do with the its direction with it all coming directly from the south. Southerly winds act as a block on migrating birds thwarting any arrivals from the west and North America and also most from the east and Siberia and Asia. Having said that there was a massive influx of hawfinches under way and some had been blown around the south coast by the southerlies and a few had ended up in the Kenidjack valley on Sunday. 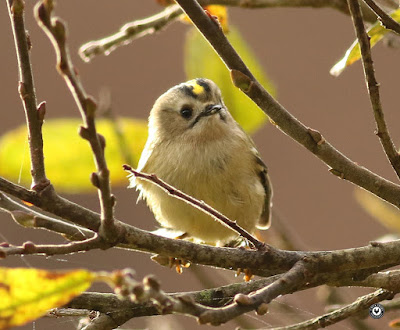 The noticeable thing this morning was the lack of wind. Hardly a breeze in the tree tops. What a contrast from the preceding day! As we eagerly walked into the Kenidjack, wondering if ex-hurricane Ophelia had dumped anything rare into the valley, a familiar car pulled up alongside and our good friend Badger greeted us from within. After exchanging pleasantries and advising him of where to park we arranged to meet next to the sewage works (birding isn't all glamour you know) where hopefully the hawfinches would be feeding in the calmer conditions. As I watched the Toyota trundle down the lane I was intrigued as to where he stores his surfboards in such a compact car. Maybe they had been left behind since they would be redundant in such conditions today.

I noticed some chunky finches fly in from the east and automatically fired off a few shots just in case. Having seen hawfinches on Sunday my eye was in and sure enough, even though the images were poor, they were indeed hawfinches! Just 3 and presumably the same ones that I'd seen on Sunday that must have weathered out the storm and remained in the area. Mrs Caley had now seen them which was welcome as she could now relax for a while. The hawfinches would attract many local birders to the Kenidjack over the next few days since they are a rare bird in this part of the world. Views were never great, always at distance, unless flying overhead which they did on occasion. Badger joined us and we set about finding the hawfinches in the hawthorn bushes and trees that surround the sewage works compound. "Somerset" Dave had also joined us and we all simultaneously noticed a hawfinch perched in a tree on the skyline. But, as they most often do, it flew out just as we managed to get our scopes on it. It wasn't long however before one was spotted in the favoured hawthorn bush feeding voraciously on the berries and we enjoyed prolonged views through the scopes. 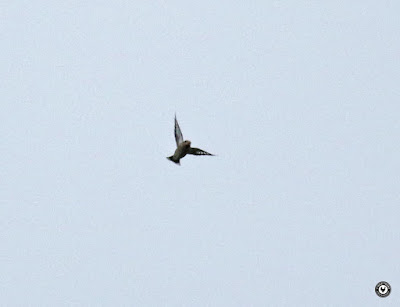 Mrs Caley and I accompanied by Badger set off down the lane to see if anything was new in and to show our friend one of our favourite birding spots in the whole country. We came across a few firecrests mixed in with the goldcrests although none posed openly. 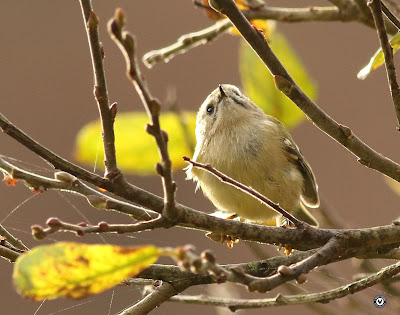 Choughs flew around usually heading towards a house up on the hills where they take food from garden feeders! They are always noisy birds, the "cheow" call telling of their impending arrival, and are always a joy to see. I guess it's the red bill and legs as well as that call which makes them so endearing. They are also very skilled flyers and give all other birds the run around! 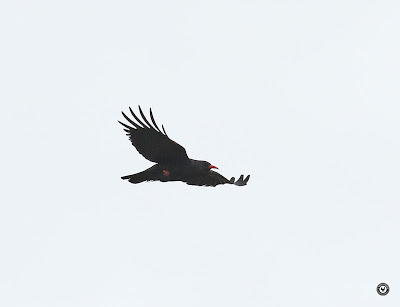 There had certainly been an influx of wood pigeons overnight and at least 50 were feeding on ivy berries from bushes that adorn the old mining buildings. The trees by the donkey paddocks held nothing but goldcrests and chiffchaffs so we carried on along the path to the cove at the bottom of the valley. A few gannets passed by Cape Cornwall at the end of the bay and a couple of oystercatchers fed amongst the rocks on the shore. Our hopes of finding something rare had pretty much dissipated by this point and we all just enjoyed the tranquility of the scene. The walk back brought us a semi-surprise in finding a great spotted woodpecker feeding among the trunks of some sallows by the stream. Although not unusual further up the valley we considered that this bird was probably a recently arrived migrant bird from elsewhere.


A further check by the donkey paddocks yielded nothing different and the only birds to lift a disappointing morning (bird wise) was watching a buzzard at close quarters and a kestrel on the hunt. Oxfordshire's finest surfer dude left us at his car and we went in search of lunch before heading out again in the afternoon.
Now that we had nice sunshine and calm weather we decided to go for another look for the short-toed lark by Escalls chapel. The rough winds of the previous day had thwarted us but by allacounts the lark was still present and showing well. As we pulled into the lay-by the first person we saw was Badger who was glued to his scope and viewing the field that contained the lark. The now usual response, "it was here 5 minutes ago but has just flown out of view" followed our question as to its whereabouts so I set about trying to find it as well. It took about 10 minutes of careful searching when in unison we both said "there it is!". Short-toed larks are pretty distinctive even when seen from a fair distance away with their pale eye rings giving them a "panda eyed" expression. They are also very pale coloured which is striking against dark brown earth. They also feed in a very deliberate fashion pecking at anything within immediate reach rather than scuttling around searching for titbits. So at last, a decent bird for the day and only the third that I've seen in the UK. 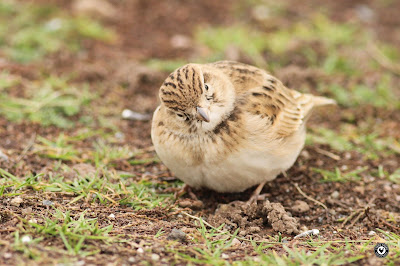 The field also held a ringed plover, lots of meadow pipits, just a few pied wagtails (compared to the hundred or so the previous day) and, amongst the gulls, at least 2 Mediterranean gulls which I always enjoy seeing. They were, in keeping with all the other birds, right at the far end of the field so good photos were impossible to obtain.
After a final farewell to the "Listless Twitcher", Mrs Caley and I returned to the Kenidjack for another look at the hawfinches. They were still feeding in the hawthorn bushes and were still as distant as before but still very alluring! We noted several stonechats now, a linnet on overhead wires and a gang of choughs were settled on the roof of a house waiting their turn at the feeders in the garden. 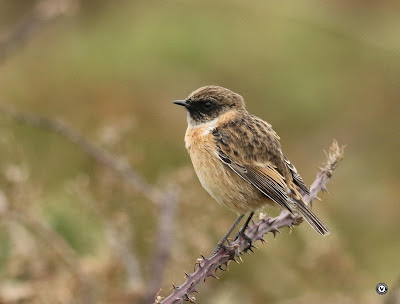 Finally a new bird for the week in the shape of a spotted flycatcher was seen capturing its prey above the sewage works compound.

A pleasant day spent in pleasant company even though spending time with one of Oxfordshires most eminent birders didn't turn up anything really good. Maybe I should take up surfing?

See http://thelistlesstwitcher.blogspot.co.uk for a far more entertaining take on the days proceedings.